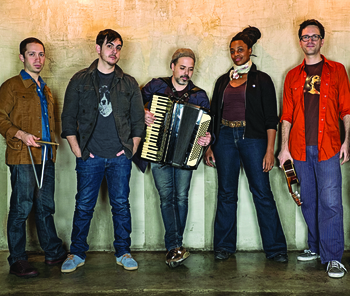 A decade ago South Carolina native Clay Ross, a New York-based jazz musician, found himself in Brazil studying its folk music at about the same time he was rediscovering the songs of his native South. The guitarist and singer titled his debut disc Matuto, Brazilian slang for backcountry bumpkin. Described as “weird and wonderful, unorthodox and delightful” by Jazz Times, the set allowed Ross and his band of NYC musicians to perform North American folk and blues songs over South American rhythms, including forró, chorinho, samba, maracatu, and frevo. Matuto has since expanded into an ebullient mix of Pan-American influences–always with a steamy, sensual dance groove at the center– playing not only the biggest jazz festivals, but folk and indie rock stages as well. Appalachian fiddle tunes bounce with a Brazilian lilt, the Berimbau resonates with a strangely effective blues riff, long chromatic melodies weave through intricate arrangements and infectiously funky folkloric rhythms. With a deep love for roots traditions and improvisational experimentation, Matuto is part of a broad, loose movement of hard-to-define acoustic innovators, savoring their own heritage as they commune freely across genres and cultural lines.