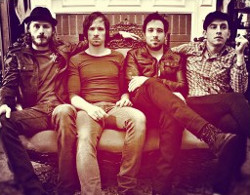 The band’s members hail from the all over the world—Brazil, France, Canada, the U.S.—and the rock music they create, a rich and complex musical tapestry that reflects their international upbringing, draws on influences from around the globe. Three are the children of missionary parents, who spent their young lives traveling the globe. By happenstance they came together in Rio de Janeiro in 2009 to make music, soon relocating to Austin to record their debut EP, The Bright Lights, which spawned a Top-50 hit with “Providence” and earned them a devoted following and Top-10 placement in six categories at the Austin Chronicle’s 2011 Music Awards, and they’ve been turning heads ever since. We are happy to welcome one of rock’s most exciting emerging bands.