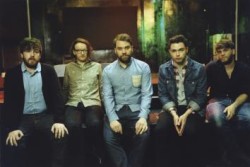 An enormous buzz has built up around Scotland’s hottest indie rock band, who formed in 2003, tromping the highlands and lowlands playing a thoroughly modern form of indie rock that stands out for its quirky lyrics, overlapping melodies, intertwining racing guitar lines, unique and unexpected beats, and emotive vocals well drenched in Scottish accent. The Glasgow-based outfit is adored on native soil, but their songs seem to take on greater resonance the further from home they travel, including packed stints at this year’s Lollapalooza and SxSW. Of the 10 US tours undertaken thus far, each has been bigger, noisier, rowdier, and more intense than the last. The band debuted its first album, Sing the Greys, in 2006. Two years later, the superb Midnight Organ Fight was released t to huge critical acclaim and put the band on the map, so to speak. Its latest, Pedestrian Verse, came out early this year after the band signed with Atlantic Records. Tulsa Roots Music is jazzed to present FRIGHTENED RABBIT.