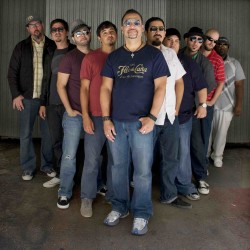 Latin funk masters Grupo Fantasma, an 11-piece Grammy-winning ensemble from Austin, collectively form one of the most unique musical voices of the past decade. The band’s vibrant fusions—funk, rock, soul, world music—transcend easy classification, boasting a universal appeal beyond just Latin or world music fans. Their incendiary live shows have earned them spots on major festivals and venues internationally including Bonnaroo, the Kennedy Center, London’s O2 Arena, and Montreal Jazz Festival. Their music has been featured in Breaking Bad, Weeds, and Law and Order, to name a few. They have served as the backing band on several occasions for the likes of Prince and Spoon. Bring your dancing shoes for this one.