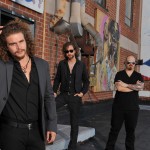 A young British power rock trio, Leogun has been described as “an even more unhinged Led Zeppelin.” Full of brash rock ‘n roll bravado and swagger, the band’s blues and soul-soaked sound is reminiscent of classic rockers Humble Pie and Thin Lizzy while drawing comparisons to Queens of the Stone Age and the Raconteurs. Yamaha Entertainment Group signed Leogun as the first act on the company’s new label, releasing the band’s Nashville-recorded debut album By the Reins in June to critical acclaim. This summer, the band had support dates with both Queens of the Stone Age and KISS.