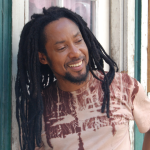 Taj Weekes and Adowa blend elements of reggae, acoustic roots rock, and Afro-folk. Armed with a hauntingly beautiful falsetto, Weekes sings about love, peace, truth, triumph, hope.and social justice that transcends race, class, gender, age, and nationality. The seeds of his values and sense of his place in the world were sown on the quiet Caribbean island of St. Lucia. The youngest of ten children, music was everywhere: at home, in church, at local talent shows in which he participated, at parish centers around the island, on the ubiquitous radio. Years later, he left home to fulfill his musical ambitions in North America, forming his band Adowa and his Jatta record label. His message grew out of the innocent beauty of his island, as well as the plight of those less fortunate that had awakened his social consciousness early on. The musician’s attraction to reggae was not just in its melodies and tempos, but its tradition of giving voice to the voiceless.