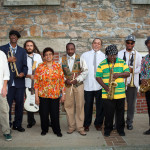 In Jamaica in the mid-1950s, artists like Bob Marley, Peter Tosh, and Jimmy Cliff began fusing a hopped-up island brew of boogie-woogie, RandB, jazz, calypso and African rhythms to create the first truly Jamaican music: ska. Eventually the beat slowed down into rocksteady, and then reggae, and spread like wildfire around the global. Jamaica’s own Skatalites, top island musicians who backed everyone from Marley to Toots Hibbert, are widely considered the first family of ska, taking the horn-driven form further and faster than any of their contemporaries.

By 1964, Jamaica’s world famous Studio One was in its infancy, as was the newly independent nation of Jamaica. Spirits were high. The vibe was strong. Jamaica was forging its own foundation and so were The Skatalites, who recorded their first LP at Studio One that year, scoring hits and ruling the Jamaican airwaves. But by 1965 the band had broken up, leaving a void that was later partially filled by hugely popular groups like The Police, The Clash, and English Beat, all of whose roots were firmly planted in the music of The Skatalites. In 1983 The Skatalites reformed. Led by original alto sax man Lester “Ska” Sterling and vocalist Doreen Shaffer, along with the current lineup of outstanding musicians, the band continues to carry the torch of Jamaican ska. Come experience ska’s greatest practitioners.