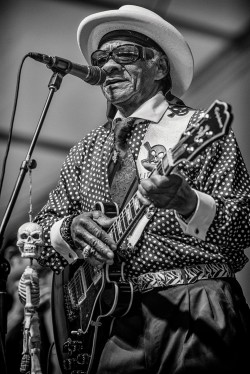 We first cottoned onto Fread Martin, a.k.a. Little Freddie King, a some years back when he released his great You Don’t Know What I Know disc for Fat Possum, the great Mississippi label dedicated to overlooked older bluesmen who play gutsy, lo-fi blues. A hard-living character who has been playing the rural electric blues of his native Mississippi in the lowest bowels of New Orleans’ Katrina-devastated Ninth Ward for years, King and his band have a penchant for hard-hitting, minimalist chords and lyrics, delivered by a cracked, heavily lived-in voice. Much of King’s material has an old-style RandB feel, but he is at his most charming when he strips it down to just guitar and vocals.

Born in McComb, Mississippi in 1940, Martin grew up playing alongside his guitar-picking father. He rode the rails to New Orleans during the early fifties where he met and was influenced by the country-cum-urban styles of itinerant South Louisiana bluesmen Polka Dot Slim and Boogie Bill Webb. Honing his guitar chops at notorious joints like the Bucket Of Blood (which he later immortalized in song), he jammed and gigged with Bo Diddley and John Lee Hooker, and played bass for Freddy King during one of the guitarist’s stints in New Orleans. People began comparing the two musicians’ styles hence Martin’s nom de plume. If you’re looking for the kind of driving lo-fi blues popularized by the likes of R.L. Burnside, T-Model Ford, and Paul Wine Jones–Little Freddie is definitely your cup of spiked tea.