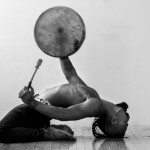 An Oregon native born a mix of Apache, Puerto Rican, and Filipino cultures and adopted into an American family, Nahko suffered an identity crisis from an early age. When he took up the piano at age six, the unifying power of music brought harmony, and he set out to bridge the cultural gaps dividing his own psyche. He began producing a musical journal of personal, spiritual, and communal healing, and thus Medicine for the People was born—a group of like-minded musicians who deliver a soulful dose of danceable vibrations. With influences as varied as Michael Franti, Bob Marley, and traditional Apache sounds, Nahko seeks redemption in his voice, guitar, flute, and drum. He sings about cultural wounds, environmental wrongs, and social injustices, but the load is lightened by agile melodies, driving rhythms, and a disarming sense of humor. Nahko has recently toured with his musical brother-in-arms, Michael Franti. His latest disc, Dark As Night, has earned raves worldwide.