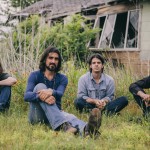 Taking their inspiration from classic American rock groups like Drive-By Truckers and the Allman Brothers, BOH’s style blends classic rock, folk, country and soul music together. BOH has been honored as “Best New Band” at the Austin Music Awards, and has been nominated in various categories at the “Americana Music Awards” over the past several years. The Wall Street Journal’s Jim Fusilli called theirs the best set at South By Southwest 2009 festival. The Dallas Morning News called them “a must-see show.”