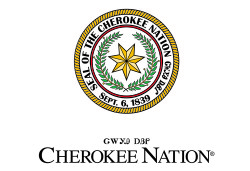 This Sunday is CHEROKEE NATION DAY on Guthrie Green. In addition to Mali’s Vieux Farka Touré and Native American blues-rockers Indigenous, featured performers will include artists from the Cherokee Nation. Tulsa Roots Music is so pleased to be collaborating with the Cherokee Nation on this special event. We are honored to be sharing our traditional Cherokee customs with people in the revitalized Guthrie Green area in downtown Tulsa,” said Cherokee Nation Principal Chief Bill John Baker. “This is a unique opportunity to bring aspects of our tribal heritage to life and hopefully folks will leave with a better understanding of the Cherokee Nation, and who we are today. We will demonstrate how we maintain our traditions and our culture in today’s modern, technology-driven world and maybe that will motivate some attendees to learn more about our tribe or even visit our capital city of Tahlequah.” Tommy Wildcat is a flute maker, performer and composer. In 2013, Wildcat received the Cherokee National Treasure award for his river cane flute music. This title is given to a few select Cherokee citizens who have shown exceptional knowledge of Cherokee art and culture.

Wildcat is a full blooded Cherokee citizen who works as a history and cultural specialist with the Cherokee Nation. Robert Lewis is a storyteller of Cherokee, Navaho and Apache descent. At age 7 he heard his first traditional story told by his father, bringing attention to the night sky and the creation of the Milky Way and why the stars are scattered across the sky. Robert often had stories read to him by his mother, but to hear an explanation for the universe while looking at the starry sky was an extraordinary experience that had a deep impact. In 2003 Lewis was working at the Cherokee Heritage Center as a tour guide and had the opportunity to tell this story to a group of schoolchildren and parents, and so began his unique journey of sharing this Cherokee tradition of storytelling.

Lewis is currently a School and Community Specialist for the Cherokee Nation. The Cherokee National Youth Choir has helped spark a cultural renaissance among the Cherokee people. Made up of 30-40 K6-12 Cherokees from northeastern Oklahoma, the group performs traditional Cherokee songs in the Cherokee language. The choir has released 11 recordings (including Voices of the Creator’s Children, featuring Grammy winner Rita Coolidge), garnered numerous Native American Music Awards, and appeared at many prestigious venues including the National Cathedral in Washington, D.C., Smithsonian Institution’s National Museum of the American Indian, the Kennedy Center, and the White House.