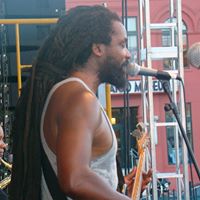 This long-time Tulsa-based reggae band (23 years and counting), led by vocalist-bassist Doc James, started in 1985 when Doc, a Virgin Islander who relocated to Tulsa, met Rich Brown, who was drumming for the Streetpeople, a pioneer Oklahoma reggae outfit. The two cut some studio tracks, were soon gigging, and released their first album, Crossover, in 1986. The band has been at it ever since. Local Hero’s original compositions have appeared on Saturday Night Live, HBO’s Sex and the City, and in many films.