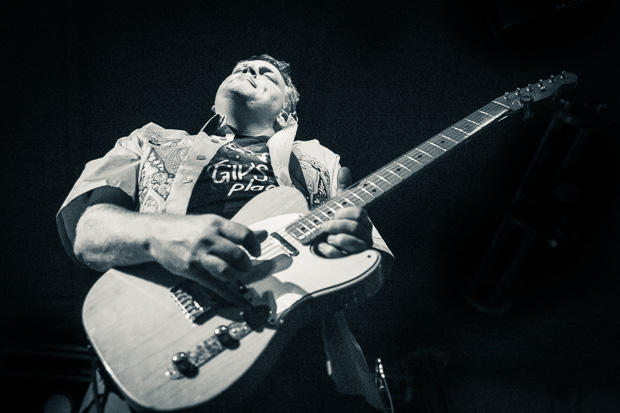 I saw Lightnin’ Malcolm with Kimbrough’s grandson, playing hip-hop drums against this grinding, excessive guitar thing. It was really good, fire baskets blazing and the stars over the Mississippi. Suddenly, I thought, Wow, how did I get here? —Robert Plant on how he found his “big voice” again.

A charismatic and energetic guitarslinger with a deep, soulful voice, Malcolm has taken his relentless, hypnotic Mississippi Hill Country dance grooves from southern juke joints to international stages opening for the likes of Robert Plant, Buddy Guy, The Black Keys, Widespread Panic and Gary Clark Jr. A rhythmic force of nature, Malcolm’s one-man band (he plays guitar, harmonica, and kick drums simultaneously) sounds like a full ensemble, combining the electrified raw drones of rural blues with elements of funk, soul, rock and world beat. “They used to send for me at juke joints as a one-man band, and everybody would be dancin’ to Al Green and Tyrone Davis,” says Malcolm. “Then they would shut the jukebox off and stick me out in the middle of the floor. I’d be nervous because the jukebox sounded so good. But this was how I was surviving and failure was not an option. You had to win them over on the first song or you wasn’t gonna get another try. But once you did you was about to have the greatest night of your life. My music was developed on America’s funkiest dancefloors!”