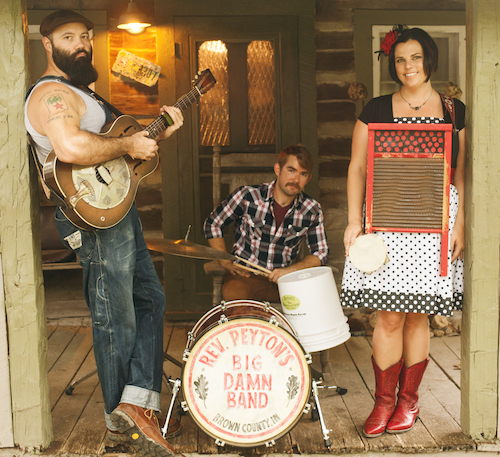 The country blues is a gift of 20th century American music, and it’s awesome to see a band tap into its legacy with so much gusto and original vision. – Music City Roots.

The Reverend Peyton’s Big Damn Band—embraced equally by traditional country-blues, indie rock, and punk audiences—plays an infectious, updated version of the sound created by country blues legends Son House and Furry Lewis. “We end up playing with a lot of punk rock bands and any kind of roots acts from bluegrass to alt-country to rockabilly to you name it. We’ll play with anyone, really,” says frontman Revered Peyton in his deep Hoosier drawl. Formed in rural Indiana, the band’s 2006 debut impressed Irish rock act Flogging Molly so much that the band invited them out on the road. “They said that they do to Celtic roots music the same thing that we do to old country blues: Write songs about things that are happening now and people we know,” whether it’s a number about being too poor to afford health insurance of just missing Mama Peyton’s fried potatoes. The band’s live shows are a decidedly raucous experience. “We come from the same tradition as Charley Patton and Furry Lewis,” says the Reverend. “Patton was playing with his teeth and behind his head in 1930. Now people say that’s punk rock, but they’ve been doing that for a hundred years…. Country blues was the first punk rock, if you ask me.” Peyton is a persuasive evangelist for the rootsy country blues styles that captured his imagination early in life and inspired him and his band to make pilgrimages to Clarksdale, Mississippi to study under such blues masters as T-Model Ford and David “Honeyboy” Edwards.

The band’s latest release, The Front Porch Sessions, echoes the enduring spirit of such acoustic blues icons as Charlie Patton, Blind Willie Johnson, Bukka White and Furry Lewis, whose “When My Baby Left Me” receives a memorable reading. “I wanted it to feel like you’re on my front porch. You can almost hear the wood creaking. I just went in and let my gut guide me. We used a lot of vintage gear in the recording. I love that organic sound, and I’m always chasing that in everything I do. I just like things that feel timeless, which is way more important than feeling old. I’m interested in making hand-made American music, and the goal is to be timeless.” Peyton has already begun to integrate The Front Porch Sessions’ spare approach into the Big Damn Band’s expansive live shows, which are renowned for their intensity and abandon. “Over the years, our shows have gotten more dynamic,” he continues. “The ups are more up and the downs are more down. That’s something that’s important to me. If I go and see a show and someone’s just standing there and staring at their feet and singing their songs, I feel insulted. That’s not a performance. I want to know that you’re living that song, not just regurgitating it. I don’t think artists should seem like they’re too cool for their audience. I’m one of those people who feels everything really hard, for better or worse. If I’m angry, I’m really angry. If I’m sad, I’m really sad. If I’m happy, I’m really happy. So onstage, I tap into that. There are certain songs that I can’t play on some nights, because they’re just too sad. That may be the rantings of a crazy person, but it’s the God’s honest truth.”