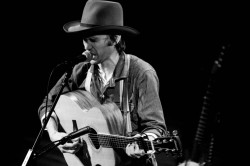 Looking like a man from leaner and meaner times, Willie Watson steps on stage with a quiet gravitas. But, when he opens his mouth and lets out that high lonesome vocal, you can hear him loud and clear. His debut solo album, Folk Singer Vol. 1, was produced by David Rawlings at Woodland Sound Studios, the studio he co-owns with associate producer Gillian Welch in Nashville, TN, over the course of a pair of two-day sessions, for their own Acony Records label. The album spans ten songs from the American folk songbook ranging from standards like “Midnight Special,” “Mexican Cowboy” and Richard “Rabbit” Brown’s “James Alley Blues” to the more obscure, like Memphis Slim’s 12-bar blues, “Mother Earth,” Gus Cannon and the Jug Stompers’ “Bring it With You When You Come,” Land Norris’ double-entendre kids chant, “Kitty Puss” and St. Louis bluesman Charley Jordan’s sing-song “Keep It Clean.”

Like the music, Willie can be murderous, bawdy or lustful, sometimes in the course of a single song, with a sly sense of humor that cuts to the quick. He counters a masterful bravado with the tragic fragility of one who has been wounded. “There’s a lot of weight in the way Willie performs,” says Rawlings, longtime friend and producer of Watson’s previous band, Old Crow Medicine Show. “He’s had some tragedy in his life, which has informed his art. There’s an emotional edge to what he does because of who he is as a human being. Willie is the only one of his generation who can make me forget these songs were ever sung before.” Born in Watkins Glen, N.Y. – best-known for its race track and the rock festival of the same name which took place there, featuring the Allman Brothers, Grateful Dead and The Band – Watson grew up listening to his father’s basement record collection, including Bob Dylan and Neil Young, before stumbling on a Leadbelly album at the age of 12. Combined with having heard plenty of local string bands – featuring old-time banjo and fiddle – Willie experienced an epiphany. “As soon as I heard that record,” he recalls, “I was hooked.”

With a voice that could quaver in the operatic style of his favorite, Roy Orbison, Willie went on to discover North Carolina Appalachian fiddle and banjo players Tommy Jarrell and Fred Cockerham, who played songs like “Cripple Creek,” “Sugar Hill” and “John Brown’s Dream” on a compilation cassette of “round peak style” music. He began to unearth Folkways albums, including the label’s groundbreaking 1952 Harry Smith compilation, Anthology of American Folk Music, which helped kick-start the ‘60s folk revival lovingly captured in the Coen brothers’ Inside Llewyn Davis. He discovered like-minded souls in Old Crow Medicine Show. “When we started that band, I found people that were cut from the same musical cloth,” he says. “They were my age, into the same thing, going down a similar road. We started sharing our influences, trading records and playing together.”

A few years down that road, Watson’s work with Old Crow is already a large part of the reason that banjo and guitar driven music is heard everywhere in the air these days. On Folk Singer, we find Willie defending his musical turf. A true solo album in every sense, Watson is now center-stage, armed with an acoustic guitar, banjo and the occasional mouth harp. Indeed, hearing Watson’s skillful and subtle banjo and guitar accompaniments and soaring vocals unadorned for the first time is a revelation. “Part of me always toyed with this idea of going it alone,” he explains. “I had to relearn some things, how to fill out all that space.” Watson takes the skeletons of these songs and breathes his own life into them, on stage and on record.