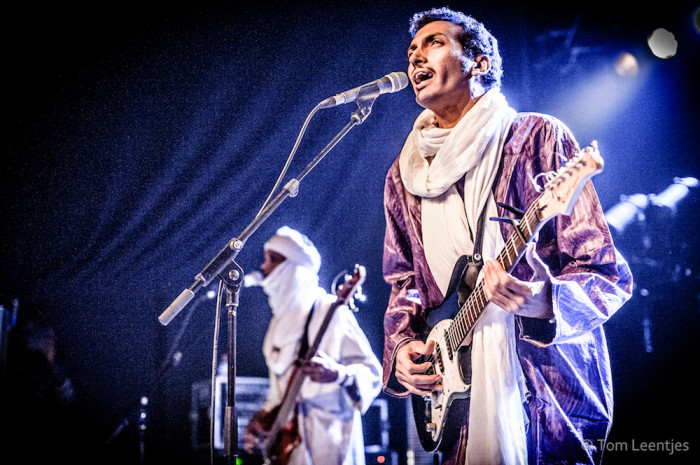 The Black Keys’ Dan Auerbach pairs up with monster Tuareg guitarist Bombino for a dream-team album. Nomad is a seductive album that manages to bring a distant Islamic culture unexpectedly close through the universal language of rock ‘n’ roll. —NPR.

Tuareg guitarist and singer Omara “Bombino” Moctar made his Nonesuch Records debut with the release of Nomad last year. Produced by The Black Keys’ Dan Auerbach, Nomad debuted at #1 on the Billboard World Music album chart and iTunes World chart and has earned rave reviews from top media outlets around the world including BBC World Service, which calls it “utterly, utterly fantastic” and Rolling Stone, which calls Nomad “a perfect match of sound and soul that] introduces a new guitar hero.” His dazzling live performance and virtuosity on the guitar have led notable music critics to compare him to Jimi Hendrix, Carlos Santana, and Neil Young. Born and raised in Niger, Bombino is a member of the Tuareg tribe, a nomadic people descended from the Berbers of North Africa for centuries they have fought against colonialism and the imposition of strict Islamic rule. During his lifetime, the Tuareg people have fought the Niger government to secure their rights on numerous occasions, causing Bombino and his family to flee several times.

During one such exile, relatives visiting from the front lines of the rebellion left behind a guitar and Bombino began teaching himself to play, eventually studying with the renowned Tuareg guitarist Haja Bebe, who asked him to join his band, where he acquired the nickname Bombino—a variation on the Italian word for “little child.” While living in Algeria and Libya in his teen years, Bombino’s friends played him videos of Jimi Hendrix and Mark Knopfler, among others, which they watched over and over in an effort to master their licks. Bombino worked regularly as a musician and also as a herder in the desert near Tripoli, spending many hours alone watching the animals and practicing his guitar. Eventually, Bombino returned to Niger, where he continued to play with a number of local bands. As his legend grew, a Spanish documentary film crew helped Bombino record his first album, Group Bombino’s Guitars from Agadez Vol. 2, which became a local radio hit. In 2009, Bombino met filmmaker Ron Wyman, who had heard a cassette of Bombino’s music while traveling near Agadez. Wyman was enchanted by Bombino’s music and tracked him down. Bombino eventually returned to Agadez with Wyman and staged a concert to celebrate a newfound peace in his country. That event established Bombino as a hero of the Tuareg people, and set in motion his newfound place on the world stage.