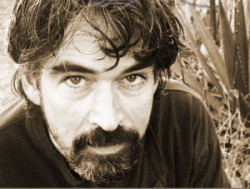 When Slaid Cleaves moved from Portland, Maine, to Austin in 1991, he landed a few blocks from the legendary, seedy Horseshoe Lounge. But as he points out on his new live album, “It was many years of drivin’ by before I worked up the courage to come in through the door.” Curiosity and the lure of stories contained within eventually won out, and the rest, as they say, is history. In 2000, Cleaves released “Horseshoe Lounge,” an ode to the old beer joint, on his debut Broke Down, which transformed Cleaves from feckless singer-songwriter playing open mics to chart-topping, New York Times-lauded national touring artist. Success led to tireless touring over the past decade, as Cleaves developed a reputation for sincere and entertaining shows featuring intimate songs and top-notch accompanists. Twenty years after his Southwest migration, he’s releasing his first live album titled Sorrow and Smoke: Live at the Horseshoe Lounge.