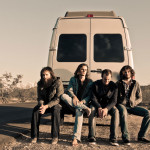 KONGOS is a rock band of four brothers, sons of 70s progressive pop artist John Kongos. Currently based in Phoenix, the brothers grew up in London and South Africa. Their music features a unique blend of driving rhythms, accordion and group vocals. Their songs continue to top the South African music charts, and ESPN used their single “Come with Me Now” to promote its coverage of the 2013 Bowl Championship Series. In 2012, the band was support for both of Linkin Park’s South African stops, and this summer KONGOS performed several UK dates in support of Awolnation. A band to be watched, KONGOS is poised on the edge of a US invasion.