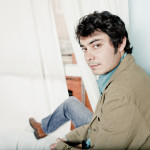 This young singer-songwriter from Taos, NM has a penchant for writing catchy folk-rock songs that are spare, enigmatic, and a touch bluesy. The son of a furniture craftsman, Gomez grew up learning the tools of the trade while simultaneously learning his way around the frets of his guitar. The workmanlike quality of his songwriting carries over from his days spent in the woodshed. Through an economy of words, phrase and narrative, Gomez’s storytelling oscillates between everyman poetics and enigma. His debut, Rule the World, was released on New West Records early this year. In the span of i10 songs he explores heartbreak, regret, young love, desperation and, ultimately, redemption.