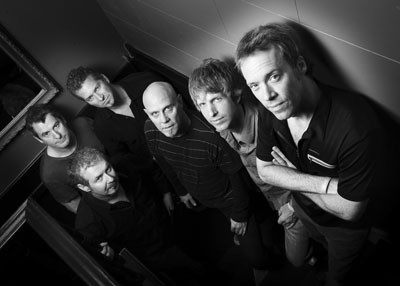 ”There are no gimmicky drinking songs. This is like a pint of honest rock music with a shot of Irish flair dropped in for extra kick.” Although the Young Dubliners sound is most commonly called “Celtic Rock,” that label is somewhat misleading. The Irish influence is there, certainly, but it’s not the only influence—after all, several of the band members have no Irish roots of any kind. “That was always the idea,” says lead singer Keith Roberts. ”The sound was always intended to be a hybrid because we all come from different backgrounds. Even though two of us are from Ireland, a lot of the music we listened to growing up wasn’t Irish at all. But when we got here, we got homesick and developed a new appreciation for Irish music. In truth the Celtic riffs can just as easily come from the American band members.” The band plays hundreds of shows to thousands of fans throughout the U.S. and Europe every year, has twice appeared on Jimmy Kimmel Live!, and contributed songs to Sons Of Anarchy and Human Target. The band’s ninth studio album is entitled, well, 9.