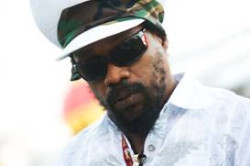 For more than a quarter century, Mykal Rose has been performing his original brand of hardcore Jamaican music, both as the lead singer for Black Uhuru and as a solo artist. Rose has consistently remained one of reggae’s top internationally touring artists, even as different Jamaican musical styles have phased in and out of popularity. Perhaps the highest profile recognition came in 1984, when Rose and his cohorts in Black Uhuru (including Sly and Robbie) won reggae’s first Grammy for the Anthem record. But the story doesn’t begin with Black Uhuru. In 1976, Michael Rose was already a seasoned performer, having honed his skills by performing on Jamaica’s hotel circuit. When an early incarnation of Black Uhuru approached him to join, he already had several solo singles to his credit, including the original “Guess Who’s Coming To Dinner.” Black Uhuru’s first full length, Love Crisis, was released in 1977 and the big hit was “I Love King Selassie.” But it wasn’t until 1980’s Showcase album that the group reached its creative peak.

At the forefront of the recordings and live shows was the charismatic Rose, whose trademark Waterhouse slurs and aggressive stage presence were so influential that iconic singers like Don Carlos and Junior Reid embraced Rose’s “Waterhouse” sound. Throughout the 1980s, Black Uhuru, with a string of popular albums on Island Records, were the world’s best-known reggae act since Bob Marley. Even today, Island continues to capitalize on the group’s success by re-compiling and re-releasing the group’s Island material. Seemingly at the top of his game, Rose parted ways with Black Uhuru and began releasing fresh solo material in the early 1990s, including Jamaican singles produced by Sly and Robbie. He has regularly toured the globe ever since, maintaining his worldwide fan base with hit singles on the island and abroad. His latest is 2013’s Show Down Inna Bloody Town on Foreign Key Records. Big thanks to all the kids, faculty and administration at Riverfield Country Day School, for sponsoring the day’s events.