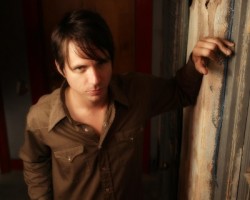 “Moore has created a brand of challenging yet highly melodic new-millennium pop-rock that establishes him as an audacious songwriter and player. He has struck that rare balance between astute complexity and utter pop appeal.” —All Music Guide.

Ian Moore’s blues-centered rock guitar prowess took 1990s Austin scene by storm. A teenage guitar prodigy, he quickly evolved into an adult virtuoso whose nuanced chops led to a stint as Joe Ely’s lead guitar player, opening slots for The Stones and ZZ Top, and a long string of critically acclaimed releases that have positioned him as one of the most diverse and soulful singer-songwriters in America. Recently, Moore has been on tour with Jason Mraz. Moore’s show at the Blue Dome Diner Roadhouse will be a rare opportunity to see him solo, acoustic, and in an intimate venue. Tulsa based singer-songwriter and multi-instrumentalist Jesse Aycock—whose high tenor and outstanding skill on acoustic and electric guitars, as well as pedal and lap steel—will open the show.